Back in my college days, I used to frequent a coffee shop tucked away off the main drag of town. It was a small, quiet spot that wasn’t particularly great for studying or getting work done. It also had coffee that – in hindsight – was way above my taste buds’ capabilities.

Nevertheless, I loved the place. The coffee was good. The atmosphere was comfortable. But, the bathroom…the bathroom was magnificent. Appealing colors. Soft lighting. Herbal-scented hand soap. A beautiful, wall-sized pre-fall-of-the-Soviet-Union world map.

In a word: Heaven.

I’ve been thinking about my beloved coffee shop recently because of three posts I’ve come across on The Atlantic’s terrific CityLab blog. In one case, a Croatian city beautified its port by shining colored lights on a group of unsightly cranes looming over the harbor. In another, a parking garage in Detroit enlisted a team of artists from across the globe to paint murals that would brighten up an otherwise ordinary garage. And, finally, Philadelphia added random blasts of color to its Amtrak corridor.

In all three cases, these places took steps to make an otherwise ordinary area into something extra-ordinary. Essentially, by harnessing the power of design, they put in play areas of their cities that could have otherwise been assumed to be out of play – and for completely understandable business-minded reasons! Garage murals don’t make money. Parking spots do. So, why bother with them?

Pizza boxes are another great example. When we started working with Papa Gino’s Pizzeria, one of the first projects we did for them was redesign their pizza box. Yes, it’s just a box, and, no, people don’t pay for a box. But, we felt it was a great chance to inject personality (“Open Slowly for Dramatic Effect”) in an unexpected place: 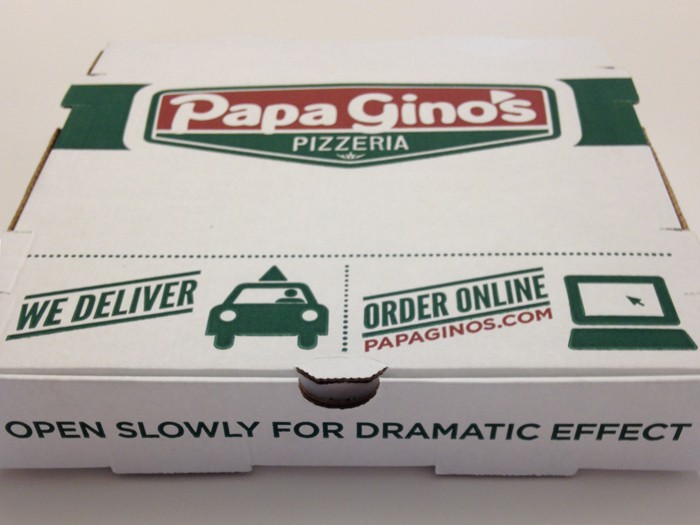 With competition becoming fiercer and differentiation becoming harder, it’s becoming more important than ever to “consider the bathroom” of your business and your brand (at least metaphorically speaking).

And, here’s the thing: If you don’t “consider the bathroom,” people won’t notice. They don’t expect it. But, by considering the most ordinary, assumed parts of your business and making surprising changes – people will notice, because a brand that cares about the little things – like its bathroom – usually cares about the big things, too.

So, think of the parts of your business that are most assumed – your packaging, the gas pump, your “About Us” page, and, yes, your bathroom. Then, strategically, give it color. Make it fun. Simplify it. Put it in play.

Because, while they might only pay for the coffee, they’ll come for the bathroom.