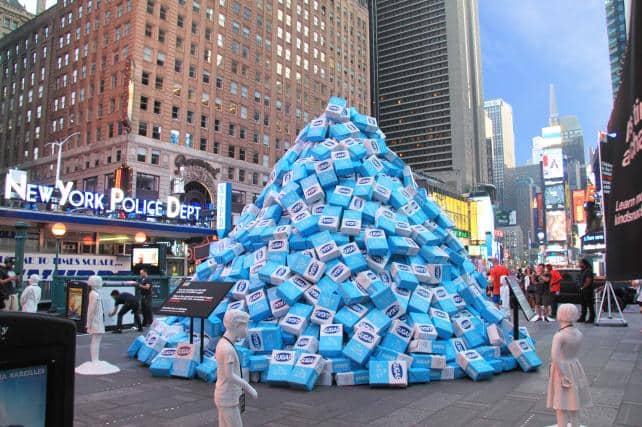 Kind Isn’t Playing Nice as it Bashes Sugary Fruit Snacks
Source: Ad Age
Kind, the kids’ snack brand, isn’t holding back with it’s newest installment in New York City’s Times Square. The installation features a circle of kids made from sugar-like materials, with a huge stack of sugar packages in the middle; this installation is meant to highlight just how much sugar American kids are consuming – a startlingly high total amount of 45,000 pounds of sugar in just five minutes. Head of Integrated Communications at Kind, Drew Nannis, notes that the average U.S. child consumes almost 65 pounds of added sugar every single year, in foods and drinks. “We have nothing against sugar,” Nannis says. “When we looked at the fruit snacks category we saw a trend of people not really knowing what they were getting and thinking products had much more fruit in them than they did.” The newest installation is meant to promote Kind products, such as Pressed by Kind bars and Kind Fruit Bars, all made without added sugar – unlike the products made by almost all of Kind’s rivals.

Brands Including Chiquita and Corona are trying to cash in on one of the biggest natural phenomena of our time.
Source: Business Insider
In the weeks before the 2017 Solar Eclipse, brands were going out of their way to make as many eclipse-related puns, marketing, and advertising. Brands involved in the space themed advertising included Denny’s, Dunkin Donuts, Royal Caribbean, Volvo, Warby Parker, The Weather Channel, and many more. Marketing technology company Amobee analyzed the best of the advertising campaigns, and determined Royal Caribbean, Warby Parker, and The Weather Channel to be the winners. Royal Caribbean offered a one week cruise during which “Total Eclipse of the Heart” by Bonnie Tyler played during the actual eclipse, while Warby Parker released a music video of “Total Eclipse of the Heart,” with rewritten lyrics to explain the solar eclipse – all while offering free solar eclipse glasses at every single one of its locations. Amobee’s Principal Brand Analyst Jonathan Cohen explains, “With so many brands competing for the audience’s attention around the eclipse in such a condensed period of time, understanding what associations are connecting is key.”

Nostalgia and Innovation Have Kept the Nearly 100-Year-Old Klondike Competitive
Source: Ad Week
In 1922, ice cream shop owner Chester Isaly and his brother’s Sam and Charlie produced the first ever Klondike bar, which instantly became an American classic. Almost a century later, the Klondike Bar is still around and still as popular as ever. Klondike’s senior global marketing director Bruno Francisco attributes the success to the brand history, “one that consumers remember growing up with and still love today.” Mintel global food and drink analyst Alex Beckett agrees with Francisco, noting “Aside from a warm nostalgic appeal, which is fairly priceless at such volatile times, Klondike’s appeal has stayed strong because of how wider innovation trends have developed in ice cream.” Klondike ran it’s famous “What Would You Do for a Klondike Bar?” campaign for over 35 years, before recently revamping their marketing and replacing the aforementioned jingle with an anthropomorphic love story, between Klondike and a variety of different candy bars, resulting in Klondike’s newest line of ice cream bars.