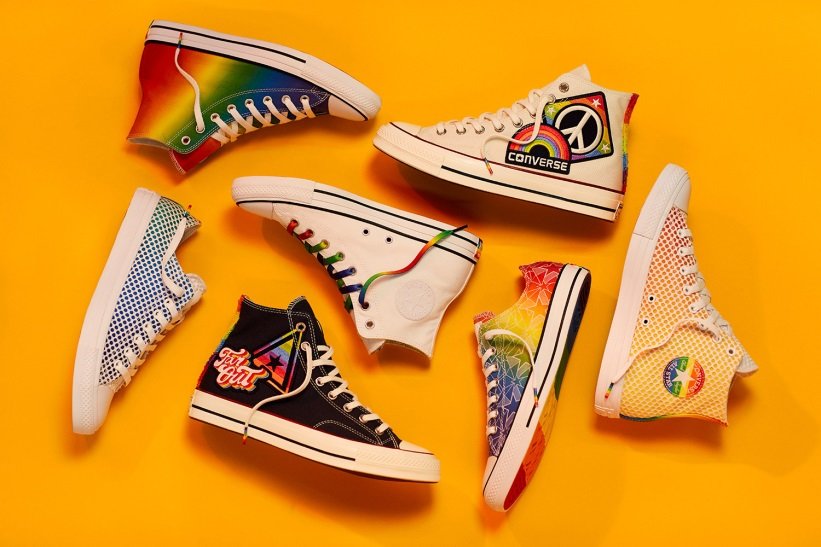 How Nike, Target, Levi’s, and Others are Letting their Rainbow Flags Fly During this Pride Month
Source: PR Week
As more and more brands cater to the LGBTQ community, pride month is becoming a key time period to demonstrate both their support, and their newest products. Nike released their “Equality” line apparel with the word “Equality” printed on it in rainbow colors. Alongside Nike’s “Equality” campaign, Levi released a line of apparel with “Fight Stigma” printed on it, while Converse released a limited line of rainbow sneakers. On the social media front, both Twitter and Instagram have revealed LGBTQ emojis, such as a rainbow heart, a trans pride flag, and pride week stickers. As Nike’s LGBTQ network leader Robert Goman notes, “The key for us was to create something that people could unite around… Sporting your rainbow in the gym or on a run became a way to feel like you belonged to something larger.”

“No Canvas, No Leather: a Reboot for the Sneaker”
Source: New York Times
“I call it techno-fashion with a sustainable sensibility… not just fashion for fashion’s sake, but fashion to protect the environment,” notes Shawn Grain Carter, a Fashion Institute of Technology professor, of designer Steven Weinreb’s newest product: minimalistic sneakers. The shoes are made from Tyvek, a water-resistant, sturdy, and breathable material. The shoes are marketed as easy on the environment – consumers can even recycle their old Tyvek sneakers at specific recycling plants that will “convert them into a picnic table or park bench or something else that’s made from the Tyvek itself,” notes Weinreb. For the sneaker lover looking for sustainably produced, minimalistic sneakers, the Tyvek design is the future.

In a Small Space, a Big Issue
Source: New York Times
As more and more people are buying smart watches, designers are all running into the same problem: in order to increase efficiency as a “smart” device, they will soon have to sacrifice both size and style. Carnegie Mellon University Chris Harrison predicts that smartwatches will soon be able to instantly look up whatever the wearer is talking about; Harrison notes, “Just glancing at your smartwatch will give you relevant information.” Other design ideas include a smartwatch that projects buttons and touchscreen capabilities directly onto the user’s arm, reducing the difficulty of operating a small screen with one’s fingers. However, as former Apple employee Bruce Tognazzini notes, “The thing about Apple is that first of all they really do deep, deep designing – they go out and look at the issue, and then they come back and do it right. And there’s that expectation…if Apple does it, it’s been done right.”