You may have heard of the Baby Boomers, Gen X, Gen Y (aka Millennials) and Gen Z before but the newest generational group has just found its label. According to an Australian consulting agency generational researcher and TEDx speaker, Mark McCrindle, it was time to label these newcomers. As is the case with other generational group labels, there was debate and some confusion over when the generation should start and end. However, the consensus is that babies born from 2010 to present-day make up the Alpha generation.  McCrindle’s research also observed that, “2.5 million members of Generation Alpha are born every week around the world” and by “2050 the Generation Alpha population is predicted to reach 35 million.”(Forbes) 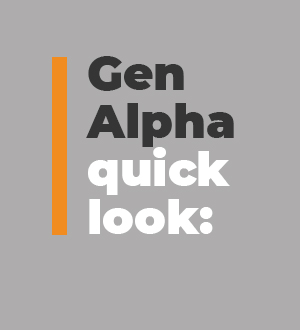 Psychologically speaking, there are several external factors that influence and shape someone’s values, beliefs, and attitudes. Factors typically include parents or parent-like figures/family, school and education, peers, religious practices, and the media. In the specific case of Gen Alpha, their parents are commonly Generation Y (Millennials) and they might have siblings that belong to Gen Z. Therefore, their family’s influence is potentially positive in predicting certain trends Gen Alpha might have adopted as their own. (McCrindle)

According to a case study by Forbes this generation also has a tremendous influence on the purchase patterns of their parents. “It has been reported children under 12 and teens influence parental purchases totaling between $130 to $670 billion a year.” Forbes also noted that, “when [Gen Alpha] do shop these children aren’t just buying toys for themselves; generation Alpha is spending around $18 billion a year of their ‘earned’ money on purchases for their siblings, parents, friends and other family members.”

Another debated factor impacting Gen Alpha is the current COVID-19 pandemic. Some Gen Alphas have never witnessed a world without masks or anything other than virtual/hybrid schooling. Granted COVID-19 has influenced all generations, but the unique impact it has on this young audience shouldn’t be underestimated.

Technology and mental health topics of interest have arisen from the pandemic as mainstreamed talking points across all generations. However, for Gen Alpha, these impacts hit their core development in long-term ways we are not able to comprehend yet.  From a young age, screens are and have been used, “as pacifiers, entertainers, and educational aids.” (McCrindle) According to a study by Forbes, “81% of parents with children this age say they [their children] watch videos or play games on an electronic device on a daily basis.” Not to mention AI like Siri, Alexa, and Google Assistant have been in their homes as tutors, DJs, and more for their entire lives so far.

Although there are perks to having technology, this early tech introduction has caused a technological reliance among the generation. Some scholars even argue negative behaviors like impatience and mental health impacts as side effects. As one parent blog put it, “living in a world of constant cognitive stimulation [means] they need more structure in their days to keep them from fidgeting…add to this is the peer pressure to perform well in school and invest time taking up extracurricular activities to excel…a lot of them could feel stressed and anxious.” This claim could hold water when cross-examined with a “rise in sensory toys items like fidgets, pop-its, slime, and putty…as a direct result of kids seeking an alternative to being online.” (Ad Age)

What does Gen Alpha mean for advertisers?

Generation Alpha’s tiny handprint on the industry has already begun, but it is far from little.

To stay relevant, marketers should keep in mind that, “today’s parents are less likely to scour the aisles of their local Target or Toys “R” Us when the internet’s boundless array of online products can be delivered to their doors with just a few clicks.” (Vox) Due to the absence of in-person, in-store shopping Gen Alpha will, “not be able to shop by impulse by calling out things in a store at the end of an aisle or near other items on their shopping list to their parents.” (Ad Age) Online shopping and e-commerce models that have been introduced and almost demanded because of the pandemic have become Gen Alpha’s preferred and often only known shopping style.

With quick access to the world of information and socially conscious parents, it should be no shock that Gen Alpha cares about social issues. Gen Alpha and their parents are calling for eco-friendly packaging and it has already created waves in toy and child-interest-related industries. Mattel, for example, introduced products “like Barbie Loves the Ocean, a recently released line of dolls made of recycled, ocean-bound plastic.” (Ad Age)

Gen Alpha has already coined its own “kid social influencers” including

According to Vox, Ryan’s World (which reviews toys) is “one of the most lucrative YouTube channels on the platform” and Charli’s Crafty Kitchen, [earns] “an average of 29 million views each month and generate an average of $127,777 in ad revenue per month.”

Generation Alpha has gone from crawl, to walk, to run for industry impacts seemingly faster than generations before them. The possibilities for marketing to the Alpha generation are momentarily limitless but it is crucial for marketers to keep an ear to the ground as Gen Alpha’s style has only just emerged.