This isn’t the first time I’ve written about meat. And since I work on the D’ANGELO Grilled Sandwiches account, I’m sure this won’t be the last.

And while I’m writing about meat, it’s worth noting that January is National Meat Month. That’s right, a whole month dedicated solely to the consumption of beef, chicken, pork and lamb – and it hits right after we enjoyed weeks of holiday meat indulgences.

But who cares! January is National Meat Month! If they say the average American eats nearly 200lbs of meat every year, then if I need to take down half of my average annual consumption in January, so be it!

Incidentally, burgers are hot right now too, and I don’t just mean literally. Sure, you know they’re available at your local QSR. And if you’re in the Boston area in particular, you’ve probably been to Wahlburgers. Or Five Guys. Or… Tasty Burger, b.Good, Boston Burger Company, Bobby’s Burger Palace. Even Sonic and Shake Shack are here now.

But D’ANGELO. Home to the Number 9. The grilled sandwich capital of the world. Obviously they are getting into the burger space. And obviously they are hitting it out of the park, competing on taste and quality as good – better, even – than some of the fancy burger places I just mentioned (trust me, I know, I have tried them all). If you must know… One of the burgers (Western Bacon Cheddar Burger) has Funyuns on it. I’m fairly certain someone on our team drooled on the floor when we visited the D’ANGELO test kitchen to try these out.

So how does a restaurant like D’ANGELO compete against others like 5 Guys and Wahlburgers? Well, unlike these other new chains, D’ANGELO is building off years of being a grilled sandwich destination – it’s what they do best. And they know their core target (men) are going elsewhere for burgers – an offering that’s an awesome compliment to everything else on their menu. So if they stick to what they do best – cooking hot, fresh, delicious, meaty sandwiches that don’t come from a freezer or a microwave – then they should not only be able to compete, but compete successfully for the long haul.

We shared this exciting news with bold point-of-purchase materials introducing the juicy burgers – and really, we didn’t have to say much. The Burgers speak for themselves. 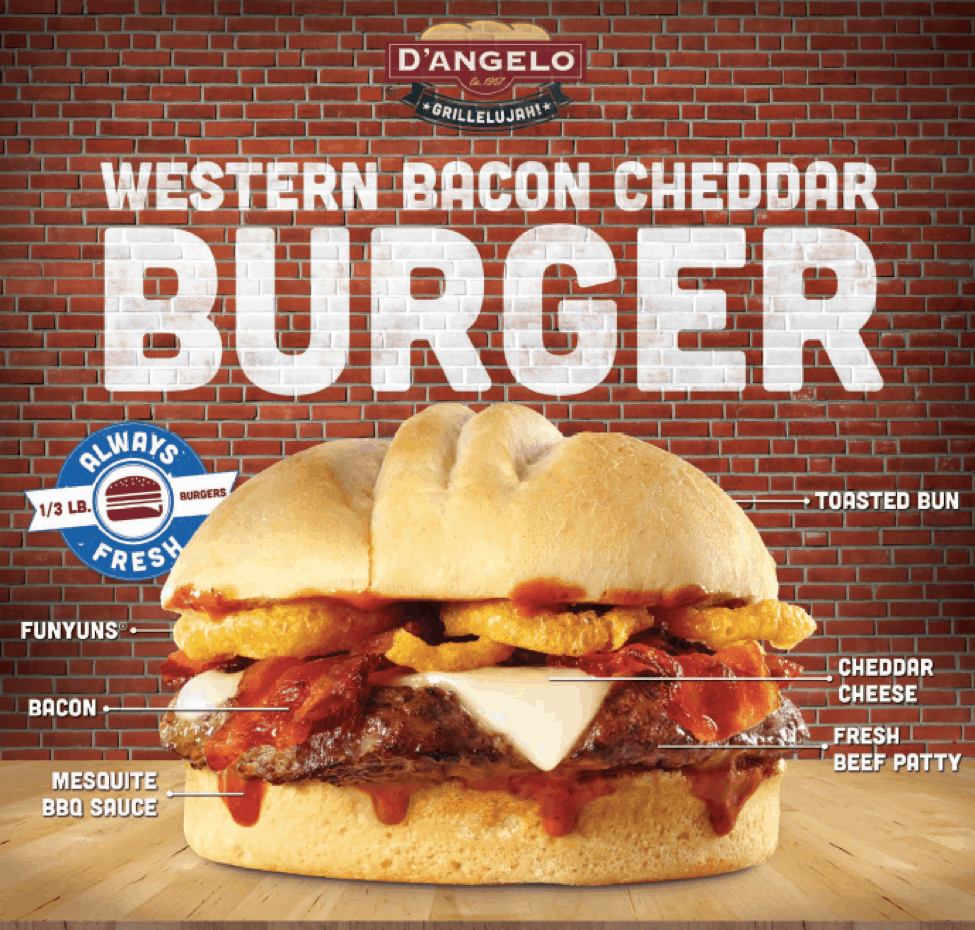 So if you’ll excuse me, I’m going to celebrate National Meat Month by starting to chip away at my average annual meat consumption total. New Year’s resolution be damned. See you at D’ANGELO.