The Next Generation: Behind the hashtags and Instagram filters, who is Generation Z?

For the past decade or so, the ever-present challenge on every marketer’s mind has been—with minimal variation—figuring out Millennials. The enigmatic generation of “sheltered optimists” and “collaborative doers” has both obsessed marketers—as well as continuously confounded them.

Yet despite all of this scholarship, Millennial expertise—in some ways—has limited shelf life. Granted, Millennials aren’t going away; they just aren’t as shiny and new as they used to be, because, just as folks have started to figure them out, a new cohort, Generation Z, is here—and they’re quite different from the previous generation.

So, before they’re all grown up, here are some of the most important things you should know about Generation Z.

Generation Z is generally considered to include anyone born after 1995. Put simply, folks older than 20 need not apply. The current population of Gen Z in the United States is an estimated 23 million—about one-third the population of Millennials.

That said, experts have yet to agree on an official end date for the Millennial generation, so—until further notice—this group has not stopped growing.

Like every other generation, Generation Z has been shaped by the times in which it has come of age—and, boy, what a time to come of age. Gen Zers were just becoming aware of the world during the fall of the global economy and the rise of social media, just to name a few events.

Here’s how the events of the past few years have shaped how Generation Z lives and work.

Just got the iPhone 6? In a few short months it will be virtually worthless when the iPhone 7 is released (NOTE: If you still have an iPhone 5, it is time to upgrade). “Upgrade”—a word well known by Gen Z. There is always something superior, something faster and newer, and Generation Z has mastered the art of adapting to these perpetual advancements.

Generation Z understands that the world is a place of constant change. Updating, upgrading and readjusting are part of Gen Z’s daily life. Every week there is a new Apple update, a new “must-have” tech device. Generation Z adapts to these different changes because, as they’ve grown up, they’ve learned that nothing is permanent.

Of course, some argue that Gen Z’s dependence on technology has led to a shrinking attention span. Some consider it one of the most concerning problems of our generation, but others argue that the influx of information they receive has given them the skill of determining attention-worthiness. As Jeremy Finch wrote in Fast Company, “They’ve grown up in a world where their options are limitless but their time is not. As such, Gen Z have adapted to quickly sorting through and accessing enormous amounts of information.”

Members of Generation Z want others to know that their characters and personalities are a reflection of more than just the social media age. Many Gen Zers watched their parents get laid off from work and older siblings reluctantly move home after college due to hard economic times.

Tragic events and harsh realities, such as the impacts of 9/11, constant war and the recession, have affected the way Generation Zers look at the world and make decisions. With free range and access to everything on the Internet, Gen Zers have experienced a loss of innocence at a younger age than Generations past. Violence, sex, and all things graphic are completely uncensored and just a click away.

Previous generations tended to be optimistic about their futures and careers while Gen Zers are more likely to be realistic about what they want to achieve.

Stephen Friedman, the president of MTV, says Generation Z’s “unbridled optimism, ambition and passion is still there and strong, but it’s clouded with a lot of really complicated world events. They know their big dreams are going to be a lot harder to achieve.”

This pragmatic nature plays an important role when thinking about their futures, as many Gen Zers place high importance on getting a good paying job. They understand the often true statement that, “It’s is not what you know, it’s who you know.” For this reason, members of Generation Z prioritize their networks and personal brands to ensure successful opportunities.

Generation Z is the most ethnically diverse group to date and will be the last generation with a Caucasian majority.

In addition to being ethnically diverse, Gen Zers aim to cultivate their personal brands to be unique. Growing up in an age where differences are celebrated and “being yourself” is constantly reiterated, Gen Zers are not afraid to emphasize their individualism.

“Standing out is the new fitting in,” said Megan Hartman, head of Red Peak Branding’s youth-oriented division, Red Peak Youth. “This generation really is about making your own mark and being an individual.”

And get this: Young kids today won’t even remember a time marriage wasn’t legal for all couples. Traditional gender roles (and the definition of gender) continue to diminish. There is less fear of expressing who you really are.

Instant gratification is the way of the Generation Z world. The answer to any question. The ability to connect with anyone around the world and an app for everything—all at the touch of their quick-moving fingers.

Unlike Gen Y, Generation Z will never experience the struggle of looking up a phone number in the Yellow Pages or the agony of waiting for your mom to get off the house phone so you can use Dial-Up internet (which took 25 minutes to load, by the way). Once upon a time, you couldn’t use the phone and Internet at the same time. Now, you have a phone, Internet, contacts, music, and movies in one tiny device.

While both Millennials and Generation Z have personalities that are largely affected by technology, their exposure to this tech-shift happened at very different times in their development. While Gen Y (and generations before) witnessed the shift of the tech takeover, a technology-controlled world is all that Gen Zers know. If Generation Y is the pioneer of technology, Generation Z is the expert.

Millennials are often characterized by the “follow your dreams” and “everyone is special” environment in which they grew up. As a highly sheltered and coddled generation, Millennials have a much more confident (some might say, ‘entitled’) personality than Generation Z. Generation Z’s environment growing up makes them appreciate order, structure, and a strong work ethic, whereas Millennials tend to be at ease with ambiguity and flexibility.

People might assume that Millennials and Generation Z are all the same—tech-crazed, social media obsessed—but, Gen Zers want people to know that they have witnessed the mistakes of previous generations, and they are determined to make a change. 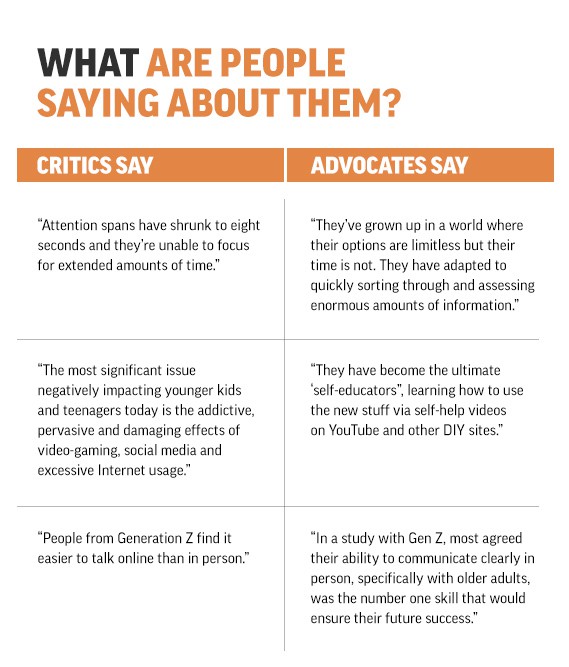